Competitions are fun, but here is why we do it…

Whether you like it or not, our world is structured around competitions, achievements and trophies.

It might be a trophy that sits on the shelf and, apart from making your proud, it requires frequent dusting. Or it might be a trophy you can’t see – an academic honor, a job promotion or an appointment to a position of great influence.

I love the drive behind the desire to achieve something great – or even just to compete. It motivates us to work, grow and push ourselves to excellence… as long as we keep in mind two things: our ‘why’ (it can’t be only self-serving), and an awareness that the most valuable part of the whole process is the process itself, not the trophy. (When we lose sight of that, the competing gets ugly; if you don’t know what I mean, just think of the recent election campaigns that got really nasty…)

So, here’s a reflection on that thought:

I walked out onto the Lucas Oil Stadium field in Indianapolis on Friday pushing a big drum. Even at 7:45 a.m., the audience in the stands was revved up, and the energy was already worthy of the “Grand Nationals” level (the big finale of the Bands of America competitions).

I am a band parent, and this year I got a chance to be on a pit crew (in Indy, home of the 500, no less!!). Yes, I could think of a hundred more pleasant things than waking up at 4:30 a.m. and walking a mile-long stretch before the show in 38-degree Midwest weather (where it feels a lot colder) before sunrise, but none of it would put me as close to my son, Evan Amadeus, and his marimba. And that’s a gift I do not miss out on.

Their show “Out There” is amazing. They already won Contest of the Champions and scored a second place in the regionals in Clarksville, Tenn. … The show’s theme of exploring the universe and ending up looking into one’s own soul for answers to the question: “Is there anyone out there?” offers a structure for very creative visuals (formations, choreographies, and props that include a giant satellite dish and a silver ‘Sputnik’.)

The music is based on Rachmaninov’s works – beautiful but really demanding, requiring skill and lots of practice, calmness and focus in performing it. It’s a kind of music material where a performer has to have the presence of mind, control AND let the emotions flow at the same time.

As I pushed toward the 45-yard line, I remembered why I never became a classical pianist. I was already an emotional mess. I felt the elevated energy of the band kids and the audience ready to be awed and moved. I felt connected to something bigger – where in my mind the music first began.

“This year, they really have a chance to make the finals,” a parent had said to me earlier. “Last year’s show was a mess.”

Apart from the music – and yes, the kids are objectively very good – their visuals are gorgeous. I guess, in a world of competitions, this year’s show can score more points and be ‘more valuable.’ 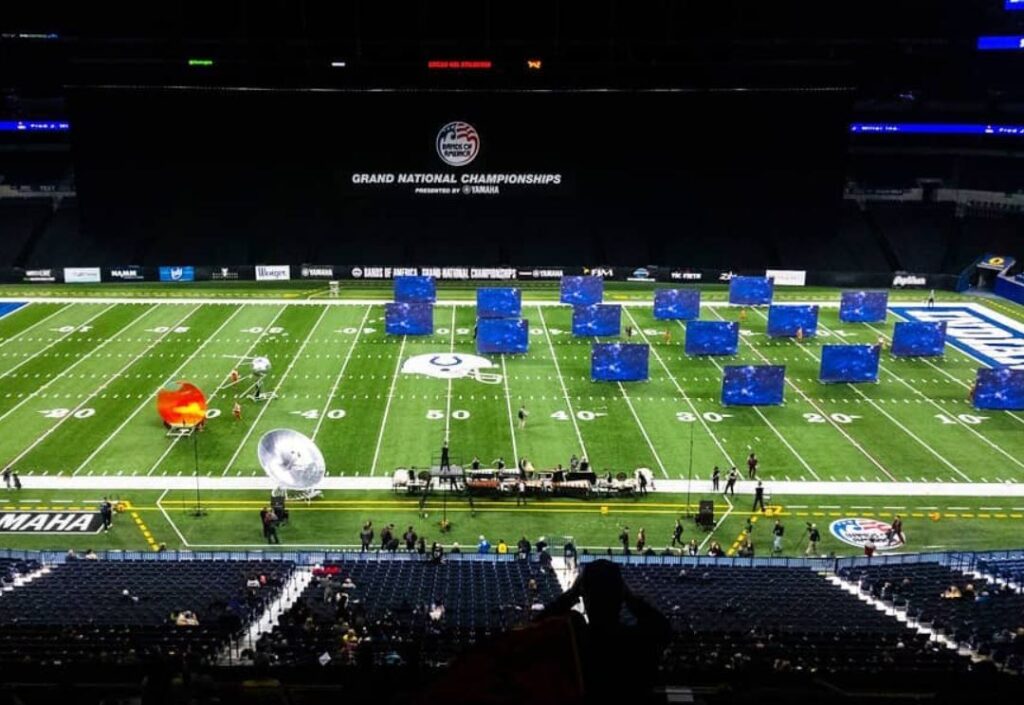 Somewhere between setting the drum in its place and before the show began, my thoughts and my heart took me back to the same time last year…

I sat in a hospital room next to my bedridden husband Matthew, who was suffering (and ultimately dying) from non-smokers lung cancer. I held his hand as we watched the live streaming from Grand Nats. His doctor advised our son not to leave town because it was likely Matthew would not be there when he returned. But Matthew was strong… and he knew how much it meant to Evan to play this music for him. So he courageously fought the pain and waited.

In that hospital room, it seemed that every note, every line of narration was directly spoken to Matthew. “Those who fly the highest, see the farthest,” the narrator’s deep voice came through over the steady rhythmic sounds of Matthews’s breathing machine. “Let go of limitations, soar free…” the voice said as the music swelled up. I understood why Evan insisted on going, and allowed the music to become the most beautiful farewell song.

Two days later, Matthew was freed from pain – and lifted up to the farthest heights, where he is truly free to soar fearlessly. Forever

Back on the field, I wiped off my tears and wondered if there was anything in the BOA’s regulations about pit crew crying… (bands can lose points if anyone in the pit crew doesn’t display credentials, or if someone pulls out a cell phone). The band director counted down, and the intro music began. I wanted to tell each kid on that field:

“Play for that someone, that one person out there
who might be watching, needing a consolation
and a bit of magic that music can bring.”

I wanted to remind each of them that what we do for each other is far more important than any trophy. So I took a deep breath and exhaled it out into the universe.

Two hundred kids supported by their teachers, parents and their community breathed their breath into their instruments and out came music. The percussionists were the heartbeat that tied all breaths into one harmonious rhythm. And they delivered a beautiful performance.

None of us – the kids on the field, the parents and teachers in the pit, or those in the stands knew anything about how the judges scored the performance, but our hearts were full.

“As I watch the night sky, I know we are all a part of the universe. But perhaps more important, is that the universe is a part of us,” said the narrator’s voice just before the last big, swelling chord.

I felt gratitude swell up inside of me. It’s what happens as we journey toward our achievements that matters.

Let’s remember that as we move on from the past and build a better future for all.